So after a couple of non Lymphoma related Segway’s I thought it was time to do another piece on treatment, as well as a commentary on a comic book rivalry which spans the last half a century.

You may have heard me mention Rituximab as the current preferred form of treatment for Splenic (indeed all) Lymphoma. Lymphoma is characterised by an excess and increasing amount of white blood cells. These eventually become an issue due to their sheer number and require ‘eradicating’ to bring the number back to a healthy level.

Rituximab destroys both normal and malignant B cells that have CD20 on their surfaces, and is therefore used to treat diseases which are characterized by having too many B cells, overactive B cells, or dysfunctional B cells (I.E lymphoma). It was developed in 1997 by Genentech/Roche.

Obinutuzumab is a similar treatment to Rituxmab, and is often described as the daughter of it, or a third generation treatment. It works in a very similar way but with slight differences.

‘Obinutuzumab is a humanized antibody, whereas rituximab is a chimeric, and differences in immunogenic potential have been seen in preclinical testing’ (http://www.medscape.com/viewarticle/822221)

So if you like they are both very similar with one being like the Hulk and the other being like the Thing, both fictional characters from the Marvel universe (although you all knew that).The Thing works with the Fantastic Four, whilst the Hulk occasionally works with the Avengers. They also have a big rivalry and often fight, with dozens of examples of an unstoppable force meeting and immovable object. Depending on circumstances one will outfight the other, with the Hulk more human form (stretching, but hey its a pretty dry topic) being ultimately marginally better than the Things slightly more rocky chimeric one. The Thing actually predates the Hulk as well ‘The Fantastic Four #1 (November 1961)’ opposed to the ‘The Incredible Hulk #1 (May 1962)’ and so my very weak analogy holds together and lets me show you this picture. (hint, the Hulk/Obinutuzumab is green)

Clash of the Treatments

Anyway, back to the treatment and to go into a little more detail (please bear with me)

So fundamentally they are similar but slightly different.

Initial results in Obtinutuzumab are good, better than its predecessor so on the surface of it that’s very positive news. One set of results was gained but carrying out a large set of tests on older subjects to see both response rate and progression free survival (PFS) rates. Obtinutuzumab came out better.

‘The trial randomized 781 patients into one of three treatment arms:

The trial’s primary endpoint was PFS, and those patients in the treatment arm had a median PFS of 26.7 months, compared to 15.2 months for patients receiving rituximab.

Complete response rate in the treatment arm was superior as well, with a rate of 21 percent, compared to just 7 percent in the rituximab arm.’ (http://www.lymphomainfo.net/news/studies/ash-2013-obinutuzumab-beats-rituximab-in-older-cll-patients)

I will stress this has only been tested on older patients, so no direct impact on the younger of us who are dealing with this condition. It is though, promising.

So with Obinutuzumab winning it could be like the rivalry mentioned. The Hulk nearly always beat the Thing. He was stronger and could get more powerful the more angry he became. It usually ended up being, 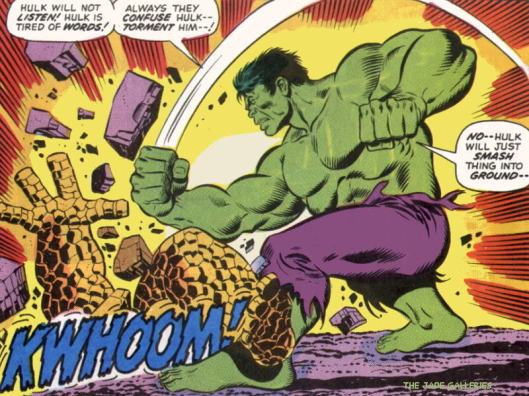 A slight note of caution though. Both products were researched and manufactured by Genentech/Roche. After being on the market for a few years rituximab is coming to the end of its product patent life. Once this occurs other companies can make it without all of the R and D costs associated, and consequentially you will see cheaper versions come out, as it will have less overheads. This also means that Roche will make less money from it, as they won’t have an exclusivity cost.

The cynical part of me would suggest that maybe a new product coming on the market with better results would then replace the older one, allowing Roche to keep the premium on the drugs. This is complete conjecture, but until I see more trials, carried out by a variety of organisations I won’t come down on either side.

Either way new drugs are being created and ultimately whether you end up with the Hulk on your side or the Thing, they can be pretty formidable allies. Now I’m just waiting for the fourth generation drugs that actually cure the condition. Who knows, it might take elements of both and what a tag team that would be…

Countdown to ten years without treatmentJuly 8, 2023
19 months to go.