Yesterday I was introduced to my camel, who would be my steed for two days. I named her/him Bessie and over two hours he/she confidently made her way across the dunes. Only slightly mincing my testicles into pate. I later found out he was Bessie, but he didn’t seem to mind the name. Other people chose different names, some ranging from affectionate, like Gordon and others like ‘You bastard’. The first day was a bit tough, with some chaffage, but by day two I was riding using only my legs and I really enjoyed the experience. The others enjoyed it to a greater or lesser extent, with the words ‘never again’ being cast around. This seemed a little mean to the camels, but then it did require a certain amount of not caring about discomfort.

I have been in morroco for three days now and it is, so far, very interesting and fun. The culture is a strange blend of Muslim and northern African, and although the call to prayer sounds out on a regular basis, few men have big beards and everyone seems fairly relaxed.

The weather is pretty hot and suncream is needed. The first place we arrived at Ourzazate was 15 degrees but the last two days it has been 25.

The camels took us out to a camp in the middle of the Sahara. As expected there was a lot of sand dunes, but there is also a surprising amount of scrub. It had rained heavily in November, for the first time in four years, so it seems greenery is rejoicing. 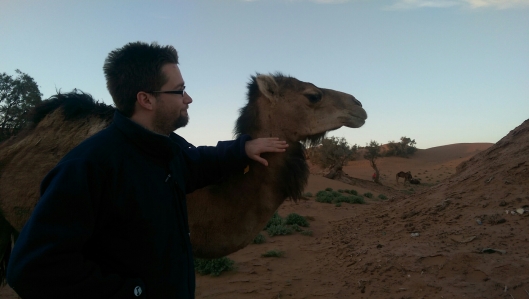 We spent a wonderful night under the stars by a fire. And what stars. The view was amazing, with no light around, and you could see far more than in the UK.

The temperature dropped at night as well, so you have to keep several layers around, quickly putting them on at night and off in the morning.

We also saw the sun set and the sun rise. It was amazing to see the light leaking over the sand dunes, and the whole group got up at 6 to see it. It was like liquid gold and people made the most of an unusual photo experience.

The group themselves are all from the UK, with the exception of a Canadian. It’s a mixed age group, but everyone seems well travelled and its a nice bunch, everyone is mixing well and no one has splintered off.

There has been a lot of tagines and kebabs, but I’m enjoying them. Jo is eating a lot of salad and omelettes. So far I have been unsuccessful to get her to eat some beef…

Over all very good. We are soon off again to see some more historical sites and eat more food. I miss Bessie already…

1 thought on “Camels and the Sahara, no internal photography in sight.”

Countdown to ten years without treatmentJuly 8th, 2023
3.1 years to go.

Meditations on Philosophy, Strategy, and Life