Don’t worry people. Even though its been 4 and a half weeks since I went to the hospital for my tests, I haven’t had bad news.

Admittedly I also hadn’t had good news, in anyway.

Basically I had called three times and had waited. and waited and waited. Finally I called again and got my results through just now.

Not only did I get those, but also the ones from my tests in December, when I had something put somewhere it isn’t normally put.

Also my two year anniversary of being diagnosed has been and gone without celebration. I was waiting for the results, but now I have them I can mention that too. Happy birthday spleeny (or insert another more funny name here).

So its time to see some graphs, and also get an update on my status. Are you excited? I am.

To recap in Splenic Lymphoma the two things to worry about are rising Lymphocyte and white blood cell counts or falling red blood cells counts. If you have a lymphocyte count of over 10000 then this indicates a blood disorder, and this was how I was diagnosed. Average for an adult is 1,000 and 4,800 lymphocytes per ML. The red cell count can go down if the white cells start to see them as a threat. (Autoimmune hemolytic anemia (or autoimmune haemolytic anaemia; AIHA) occurs when antibodies directed against the person’s own red blood cells (RBCs) cause them to burst (lyse), leading to insufficient plasma concentration)

Luckily I don’t appear to suffer from this, although one of my regular readers does and it sounds like a real nightmare.

Anyway without much ado!

So this could be a little difficult to read, I’ve had a few issues with getting it on here. Just squint a little is my advice.

This one shows how the white cells have changed. As you can see they have actually gone done, or at least been stable for nearly a year. Great news! Something about my life seems to have got healthier, or some unknown change has pushed the Lymphoma into a holding pattern. Great news. 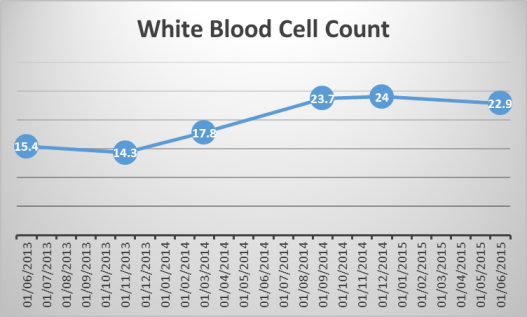 So that means in terms of Lymphocyte Count that has also gone down slightly or at least stayed level for the last year. 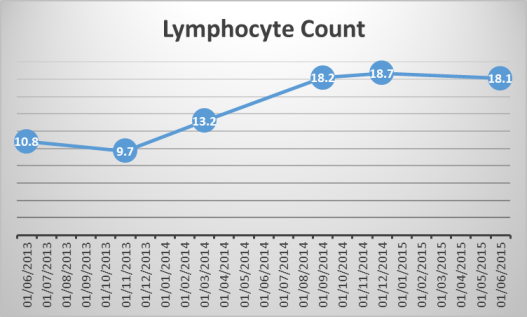 My next tests are scheduled for 9 months time, so I can ignore it all things being equal, until March next year. Maybe this old condition will be licked until I am 60, as I originally pledged.

In the darker days after being diagnosed I thought that might be it, and who knew how long I would have? Maybe as little as a year or two, or even less. There was a time I was talking about leaving Nutbourne as I wanted to make the most of my life, but with results like this it seems like I could genuinely not have any changes for years at a time. The next test will be interesting, as it will show if it stabilises for a short term, or if I can go into longer term stasis. Fingers crossed its the latter! Now I can look forward to the next year without too much worry!

Did I mention I was off to Outer Mongolia in a week? Everyone likes a crazy trip away 🙂

Until next time folks….

2 thoughts on “FINALLY I HAVE MY RESULTS!”

Countdown to ten years without treatmentJuly 8th, 2023
3.4 years to go.