As festive yule time arrives I am once again off to St Bart’s to get my tests done. It’s been a whole nine months since last time, and other than the unfortunate plague I caught in mid summer, it’s been ok (that was pretty bad though).

It’s been six and a half years since I was diagnosed, which feels like a really long time. Life has changed a lot for me, with that and in general (kids do change your life I hear) and I think it’s been mostly positive change. You know, once you get over the whole I have cancer thing.

Anyway, I’m currently stacking up ok to hit the ten years no treatment mark, if the white cells keep going as it is. The really interesting thing will be the red platelets. You may remember I developed thrombocytopenia a year and a half ago, and the cells were steadily dropping. I’m hoping I’ve had a rally, but if not and they have progressed as before then I’ll need some kind of treatment to resolve this issue.

So hopefully that explains a little more.

Life itself is tough, but going well. I’m really enjoying work and think we have a real shot at achieving something great there, with the amazing people we have onboard.

The kids are fun, and I love them and spending time with them, but they are relentless to look after. I would be so much happier if I just got two more hours sleep a night!

My second business (I buy and sell magic card boosters) is also good, although some could argue I had a enough on….

My real problem is time and recharging and has been for a few years. That’s what’s tough. Still I expect the parents of young kids echo that around the world. Its kind of bittersweet as well, because when the relentless nature of it passes, and I get more time to myself, my kids will want to spend less time with me. I have loved watching them grow up and soak in the world, and want to keep doing that without missing anything.

Maybe it’s a case of ‘be careful of what you wish for.’

I’ll just make sure I keep having ten or so coffees a day, that can’t hurt….

So life is busy, but good. Hopefully these tests won’t throw up anything odd and I can keep on trucking.

Other than that I’ve been asked to be a Bloodwise ambassador, so as I raise money for them anyway, I’ve said yes. I’ll out more up about that on a separate blog post, along with my results when I get them! :).

Keep well, have a lovely Christmas if I don’t type before, and treasure your family, friends and life. It’s important to stay happy and enjoy it, rather than just look what’s next.

Here’s a nice photo of my kids to sum up 🙂 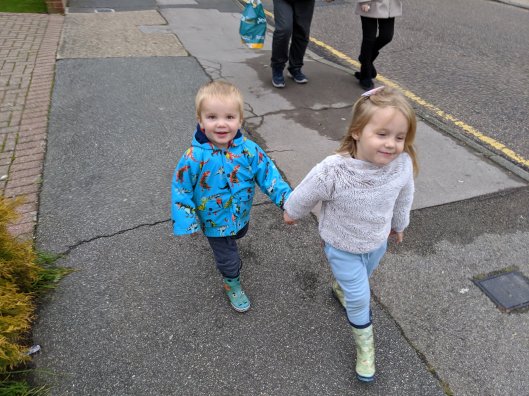 1 thought on “Another trip to St Bart’s, it’s beginning to feel a bit like Christmas.”